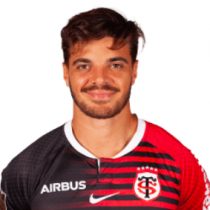 Son of former France International Emile Ntamack, Romain is one of the promising talents in the game right now.

The young playmaker burst onto the season for the France u20s in 2017 and went on to make his Top14 debut later that year.

The versatile playmaker has the ability to play fullback and flyhalf but due to his size has been extremely effective at inside centre.

His rapid start to his career was rewarded with a call up to the French Barbarians side at the end of 2017.

Ntamack was one of the standout players for France during the 2018 U20 World Championship as he guided the side to their first title in the competition.

He went into his first full season with Toulouse ahead of the 2018/19 TOP14 season.

In January 2019, he was included in the senior French squad for the 2019 Six Nations tournament, with his performances securing his name at the 2020 edition of the tournament.