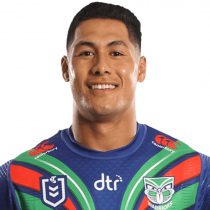 Born in Apia, Samoa Roger Tuivasa-Sheck AKA 'RTS' became one of the biggest names in rugby league since embarking on a professional sports career in 2012 and nine years later he has made the code switch.

Tuivasa-Sheck spent time in the Blues youth set up but once the Roosters came knocking, he started his league career. His success in rugby league has included being judged as the best player in the National Rugby League (NRL) when he was awarded the Dally-M Medal in 2018. Tuivasa-Sheck was a shining light throughout his time with the New Zealand Warriors. While his first season in 2016 was blighted by an ACL injury he has missed only six games in the last four years.

Coming back from knee surgery in 2017, RTS also had the added responsibility of the captaincy at the club while he also represented New Zelaand in Rugby League between 2013 and 2019 scoring 14 times in 20 appearances.

In January 2021, he announced that he would change codes after reaching agreement with the club to finish his contract a year early. He links up with Auckland for the 2021 NPC season before he will make his debut in Super Rugby in 2022.