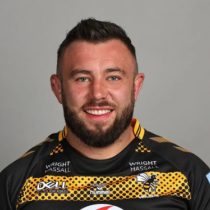 A loosehead prop who came through the ranks at Edinburgh Rugby earning international recognition for Scotland at Under 17, 18 and 20 level, eventually going on to Captain the U20s.

Hislop capped off a fine 2012 with a contract extension with Edinburgh Rugby and selection for the 2012 Junior World Championships in South Africa.

He became Doncaster's new signing for the 2016/17 campagin having signed in May from Rotherham Titans.

In April 2020 the prop forward agreed a two-year contract extension keeping the Scotsman at Castle Park until 2022.

He was a member of the Rugby Paper’s 2020 Greene King IPA Championship Dream Team and had a spell on loan with Saracens at the end of the 2018/19 season.

In May 2021, Wasps announced the signing of the then Doncaster Knights captain, who will link up with his former Rotherham coach Lee Blackett the Club.

After Wasps entered administration, Hislop returned to Saracens on a short-term deal.