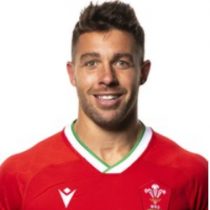 Webb made his debut for Ospreys in 2007 after coming through the Bridgend ranks and played his first game for Wales in the 2012 Six Nations against Italy as a replacement.

He represented Wales at underage level and was part of the principalities 2008 IRB World Championships squad.

Webb was a member of the Wales squad that won the 2009 Rugby World Cup Sevens in Dubai and continues to be part of the national rugby 7s set-up in 2010.

He scored his first Test try v Australia in the 2014 Autumn Tests' on his 7th appearance & added 4 more tries in his next 7 appearances.

Webb played in two 2015 RWC warm up games but an injured foot against Italy ruled him out of rugby for five months. Returned to action for the last two rounds of the 2016 RBS 6 Nations scoring a try against Italy.

In December 2016, he became the 2nd player to re-sign a NDC with the WRU continuing his 11-year allegiance to the Ospreys.

After a strong 2017 Six Nations, the Welsh scrumhalf toured New Zealand (scoring a try in the first Test) with the B&I Lions in the summer of 2017.

In October 2017, Webb announced that he would leave Welsh Rugby at the end of the 2017-18 season to join Toulon on a three-year contract.

In January 2018 he was named in Wales 6 Nations squad, he entered the competition following 31 appearances for his country scoring 7 tries.

Webb missed out on the 2019 Rugby World Cup as he was ineligible to represent Wales while in France.

In December 2019, he was granted an early release from the final year of his contract (The 2020/21 season) and signed a two-year deal to return to Wales with the Ospreys.

He was recalled to the Wales squad ahead of the 2020 Six Nations after he was granted a special dispensation for the tournament.

Late February 2020 saw him sign a deal with Bath Rugby for the remainder of the 2019/20 Premiership season.