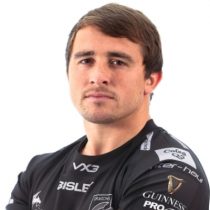 The son of former Swansea scrum-half Alan Williams, he was involved with the Scarlets set-up since 16, and was picked to join the region’s academy on the back of his U18 performances for both the Scarlets and Wales.

Having trained with the Scarlets’ senior team, Williams was picked to make his senior debut, starting in a pre-season friendly in August 2011 against Rotherham, and his career has since taken off.

During the 2011-12 season, he made a total of 19 appearances. Not only has he featured in several RaboDirect Pro12 games but he’s also had a taste of Heineken Cup action, coming off the bench in the November wins against Castres and Northampton.

In November 2017, the scrumhalf returned to Wales to sign for Dragons in the PRO14, the scrum-half made 27 appearances for Bristol.

Williams represented the Barbarians against England at Twickenham in May 2018 and again in the summer of 2019, scoring a second half try as a replacement.