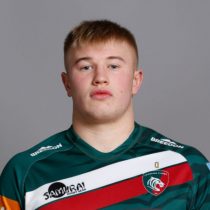 Archie Vanes made his first trip to watch Leicester Tigers at Welford Road at the age of 10 and came through the academy system to join the Development squad in 2019/20.

Originally a back-rower but now settled at hooker, Archie played in the age-groups at Melbourne RFC in Derbyshire – including a trip to Welford Road in the Prima Cup – and then with Ashby, where he shared in a County Cup triumph.

He has been included in the 2021 England u20 squad ahead of the Six Nations.