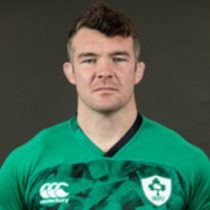 O'Mahony was born in Cork, Ireland, where he attended Presentation Brothers College. He went on to join the Munster Academy in 2008 and captained Ireland U20 at the 2009 Six Nations Under-20s Championship and 2009 IRB Junior World Championship.

The ideal modern back-rower, O’Mahony can play comfortably at 6,7 or 8, possessing the physical and tactical nous to play in any of the back-row positions. At the tender age of 23, he captained Munster for the duration of the 2011 World Cup, when the Senior Munster players were away with Ireland.

O’Mahony was named Man of the Match in his maiden Heineken Cup game against Northampton in November 2011. Due to his impressive form during the 2011-2012 season, he was named IRUPA’s young player of the year.

This form for Munster led to an Ireland call up and he made his debut against Italy in the 2012 Six Nations Championship. He scored his first international try in a 40-9 win over Samoa on 9 November 2013 and played a vital part in Ireland's successful 2014 and 2015 Six Nations campaigns.

The Munster captain excelled in the 2015 season for his home province, leading to his inclusion in the Ireland squad for the 2015 World Cup in England. He signed a new three-year contract with Munster and the IRFU in February 2015, which would see him remain with the province until at least June 2018.

In April 2017, he was named in the 41 man British & Irish Lions squad on the tour to NZ, his 1st tour with the Lions. At the time of selection, O'Mahony had 40 Irish caps. On the 17th June, O'Mahony captained the Lions against the Māori All Blacks in Rotorua International Stadium. In doing so, he became the first Munster player since Paul O'Connell in 2013 to captain a Lions team. In 2017, O'Mahony was named the captain of the British & Irish Lions for the first Test in Eden Park, becoming the 11th Irish player to captain the side.

In April 2019, he was named Munster's Player of the Year for 2019. O'Mahony was included in the Ireland Rugby World Cup squad that travelled to Japan in 2019 and featured in all five games.

June 2020, O'Mahony has 133 caps for Munster and 67 test caps for Ireland while also captaining the Lions in his sole test cap to date for the Lions.