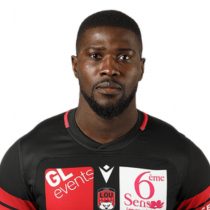 Fast and powerful, Patrick Sobela is mobile loose forward particularly with the ball in hand and is excellent at the breakdown.

Sobela started training at ASVE as a youngster before joining Oyonnax in 2009 at the age of 17.

He continued to develop at the club and become a regular in the side since his full debut in 2012 and helped the side to win the PROD2 in 2017, which lead to their promotion to the Top 14.

After nine years at Oyonnax, he signed a deal to join Lyon ahead of the 2018/19 season.

He also captained the French Barbarians against Tonga in 2019 and by the end of the 2018/19 season he had accumulated 20 appearances for Lyon.

He also made 4 appearances in the Champions Cup adding to his 6 European caps.