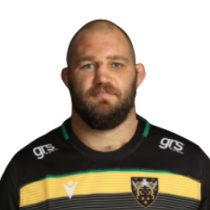 The immensely physical Owen Franks is undoubtedly one of the most feared props in world rugby. Hailing from Motueka, New Zealand, Franks has made his name as part of the the dominant Crusaders front row which has ruled so impressively in past seasons in Super Rugby.

The tighthead prop is one of the worlds most destructive scrummagers, and this coupled with his brutish defence, makes his an invaluable part of any side he plays in. Having played for the New Zealand under 21 and schools sides, Franks made his test debut in 2009, just months after making his Super Rugby debut for the Crusaders.

Since his debut victory over Ireland in 2009, Franks has gone on to be a double World Cup winner in what has been an impressive career to date. Franks has now established himself as New Zealand's starting tighthead prop and continued to be apart of the All Black set up for the better part of a decade.

After playing his 90th Test in the All Blacks' November Tour against France, Franks re-signed with the Men in Black and his Crusaders Super Rugby club through to the Rugby World Cup in 2019.

Franks lifted the Webb Ellis Cup twice along the way – on home soil in 2011 and then at Twickenham in 2015 – and locked horns with the British & Irish Lions on their tour of New Zealand in 2017, starting all three Tests.

He helped the Crusaders to back to back Super Rugby titles taking his cap tally to 146 during that time.

The experienced front-rower took his test cap tally to 100 against the Wallabies in the first Bledisloe Cup test of the year. In doing so he became the first player to play 100 test matches without scoring a single try.

In February 2019, having started 96 of his 106 Tests, the second-highest number of starts by an All Blacks prop, Franks announced that he will bid farewell to New Zealand at end of 2019 to join Northampton Saints.

Now the All Blacks' most-capped prop, Franks brought his impressive strength and scrummaging technique to the pack at Franklin’s Gardens ahead of the 2019/20 season – arriving in Northampton at the close of the 2019 Rugby World Cup.

He made his debut for Saints against Lyon in the Champions Cup following the conclusion of the Mitre 10 Cup.

Following 24 appearances in his two seasons in Black, Green and Gold, he departed Franklin’s Gardens to pursue a playing opportunity back home with Super Rugby franchise, the Hurricanes.