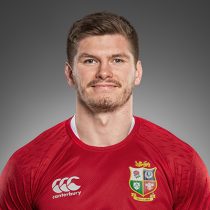 Farrell is the son of former England ace and rugby league legend Andy Farrell. Unlike his father, he chose to start his career in rugby union and quickly became one of the biggest names in English rugby circles. He can play at either flyhalf or centre, and his top class game management and superb goal-kicking ability make him a superstar.

There is little wonder that he made his England debut at just 21 following an excellent season for Saracens. He was the 2012 Premiership and RPA Young Player of the season. Farrell showed maturity beyond his years and his unerring ability with the placed ball see him make a valued contribution.

2013 saw Farrell cement his England place and guide Saracens to a Heineken Cup semi-final. After a stellar 2013 6 Nations campaign, the fly-half was selected in 2013 to tour Australia with the British and Irish Lions, where he was selected on the bench for all three test against the Wallabies, he scored 51 points in 7 appearances and made his Lions test debut in the 3rd test after missing the opening two tests.

After recovering from an injury, Farrell became fit and worked his way back into the English squad for the 2015 Rugby World Cup. England disappointed as hosts of the World Cup as they failed to progress past the pool stages, becoming the first side to fail to do so.

He helped Saracens lift the Premiership title for the second successive year with 13 points in the 28-20 win over Exeter Chiefs in the Twickenham final. In 2015/16, he was the top points-scorer in the European Champions Cup with 127, on way to claiming the Champions Cup title.

Farrell was included in a six-man shortlist for World Rugby Player of the Year 2016. He started at inside centre in all five of England's matches during the Six Nations, winning his first major international trophy as part of England's Grand Slam-winning side.

The former St George's ace has combined superbly with George Ford throughout his career with the pair starring as u20s and now with the senior side. Farrell ended the tournament as the leading scorer with 69 points, bringing his overall tally for England to 412 and making him the second-highest points scorer in the history of the England national team, with only Jonny Wilkinson having scored more.

After a successful 2017 6 Nations, Farrell was named in his second British and Irish Lions tour. At the time of selection Farrell had 52 English caps and 7 Lions caps (1 test). In May 2017, he was named the RPA Player of the Year for 2017 as well as the EPCR European Player of the Year and became the first player to receive the new Anthony Foley Memorial Trophy.

Farrell started the three tests on the Lions tour of New Zealand, the first of them at fly-half and the other two at inside centre and contributed 31 points in the drawn series. In August 2017, he signed a new long-term contract with Saracens until 2022.

When signing the deal he had made 152 appearances for Saracens and had firmly established himself as one of the best players in World Rugby and was a nominee for the World Rugby Player of the Year for 2017.

Farrell added the 2017/18 Premiership rugby Golden Boot prize to his long list of personal achievements and was named as the England captain for the 2018 Tour to South Africa. He started and captained England in all three games against the Boks, losing the first two and won the third to takes his test cap tally to 61 ahead of the 2018/19 season.

He topped points standings at 2019 Six Nations (with 59), as well as scoring the most conversions (15) and converting the second-most penalties (8).

Farrell led England at the Rugby World Cup in Japan and guided the side to the final having helped Saracens to a Premiership and Champions Cup double in the 2018/19 season.


In December 2020, Farrell led England to the Autumn Nations Cup title after winning the 2020 Six Nations, he slotted the match winning penalty in extra time against France to bring up 100 test points becoming just the sixth player in history to reach the milestone.

In May 2021, Farrell was selected for the 2021 British and Irish Lions, it will be the first time he has toured to South Africa with the side and this will be his third tour overall.

The 93 test cap flyhalf has played 13 tests for the Lions and has scored 96 points in total.