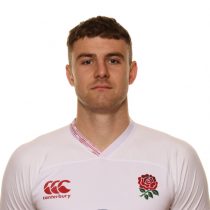 Yeovil-born Devoto was educated at Bryanston and Blandford and began his rugby career with local club Sherborne RFC. Having represented Dorset and the South West regions at underage level, Devoto went on to play for the England U19 and U20 sides.

Comfortable at both flyhalf and fullback, Devoto linked up with the Bath Academy in July 2012 and went on to represent the full Bath side on several occasions.

An injury crisis during the 2012–13 season amongst Bath’s back division saw him promoted into the first-team squad, and he made his first team debut as a replacement in a Premiership match against Wasps on September 8, 2012.

Already on the England radar at age group level, Devoto was part and parcel of the highly successful Under-20s side - which included the likes of Jack Nowell, Henry Slade, Sam Hill, Alec Hepburn and Luke Cowan-Dickie - that lifted the Junior World Championships in France.

On the club scene, Devoto continued to forge himself quite a reputation in the colours of Bath over the next few years, even featuring in their Premiership Final appearance against Saracens at Twickenham in 2015.

Devoto would spend another season at the Recreation Ground before deciding on a change of scenery, agreeing terms with the Chiefs on a three-year deal in January 2016.

In early 2016 he was named in the England squad ahead of the 6 Nations. He made his international debut against Wales in May 2016.

England would go on to Grand Slam that Six Nations with that solitary appearance of the bench being his only cap in that year's competition. That summer Devoto linked up with a number of his new club-mates on an England Saxons tour to South Africa, after which he moved to Sandy Park and was a key figure in helping the Chiefs to record a first-ever Premiership title in May 2017.

With one cap under his belt, Devoto was named in the England squad for the summer tour to Argentina in 2017 but he didn't feature for the side.

The powerful centre was in and out of the England squad following his single cap. He went into the 2019/20 season with 63 Exeter appearances scoring 11 tries.

He was once again recalled to the England squad, and selected as a substitute in the side's opening match against France in the 2020 Six Nations.