'We are fearing for the worst.'

Those were the words of Director of Rugby Rassie Erasmus when queried about Duane Vermeulen's injury after the announcement of the Springbok squad to play Georiga and the British & Irish Lions.

Erasmus added that the Springboks have been fortunate with the fitness of the squad saying: “So far we’ve actually been lucky. If you look at Super Rugby Aotearoa, they’ve lost a massive amount of players and we thought we were going to go the same route. We expected some losses … and I think Duane is going to be one of them.”

Vermuelen left the field just on the half-hour mark of the Bulls' win over the Stormers over the weekend and immediately put ice on the injured ankle. Erasmus confirmed that star no.8 will have scans on Monday to determine the extent of his injury.

The Springboks have plenty of depth in and outside the squad but Vermeulen will be a massive blow for Jacques Nienaber's charges.
The 34-year-old has been capped 54 times since his debut almost a decade ago and is the kind of player who raises his game for the biggest stage. In 2015, it was his offload to Fourie du Preez from the back of the scrum that knocked Wales out of the Rugby World Cup while he was simply one of the best players for the Springboks in the 2019 Rugby World Cup, including the final where he was named man of the match.

The 2021 Lions Series would be Vermuelen's ultimate test. The no.8's well-rounded game makes him almost irreplaceable in the starting lineup. His ability over the ball means that Springboks are not required to field an out and out fetcher at openside while his ball-carrying means that they aren't required to field a bruiser on the blindside to generate go forward. He is also a reliable lineout jumper with his leadership is a massive part of his game. He dovetails with Handre Pollard as the Boks' vice-captain and took the role as the Springboks' captain when Siya Kolisi was injured in 2019.
Looking at the Springbok squad announced on Saturday, there is no like-for-like replacement for the 34-year-old. Jasper Wiese has been sensational since joining Leicester Tigers but he still has some way to go in becoming the force that Vermuelen is at test level. He also doesn't provide the same kind of threat over the ball or at lineout time that Vermuelen does but he is a menace to defend against with ball-carrying ability being the highlight of his game.
Nienaber and Erasmus have rewarded the du Preez brothers with recalls following their excellent form for Sale Sharks, helping the side to the Premiership playoffs. Dan du Preez has regularly started in the #8 jumper for Sale during his time in Manchester. He would definitely be in the mix for a start if Vermuelen is not fit as he ticks quite a few, but again not all, of the boxes Vermuelen does. He has the ball carrying and offloading ability that Vermuelen possesses while he has developed his lineout jumping since joining Sale.
Dan's twin brother Jean-Luc du Preez has been featuring in the second row for Sale and was listed as 'utility forward' in the Springbok squad. Jean-Luc is no stranger to the no.8 jersey having filled the role for Sale Sharks, the Durban-based Sharks and the Springboks in the past. While Dan is a well-rounded no.8, his brother is arguably better over the ball than he is. He is also just as effective on either side of the ball and his lineout ability has also improved immensely at Sale. 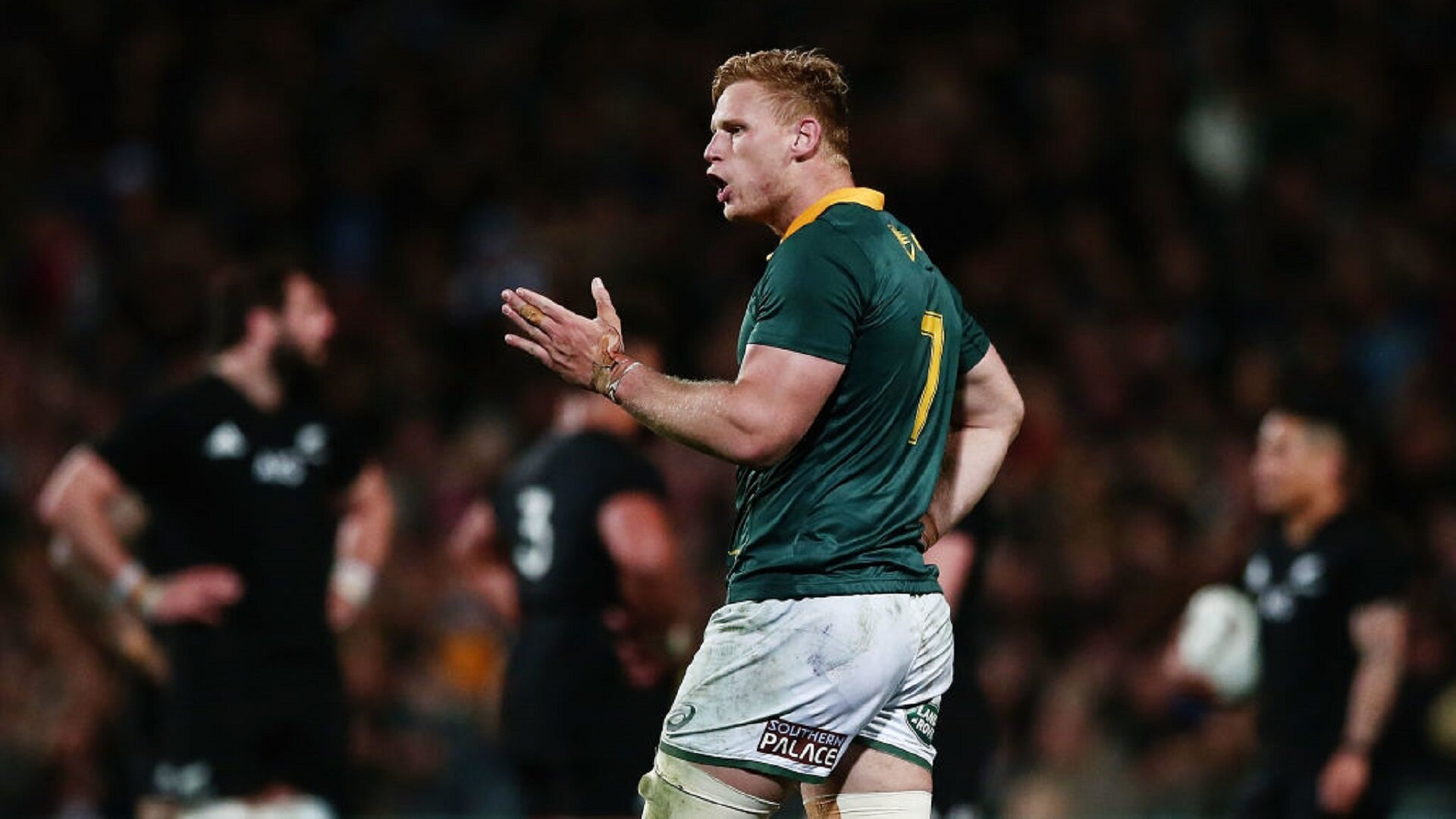 None of the three players mentioned above were involved with the Springboks' Rugby World Cup squad but there is a World Cup winner who could potentially fill in the role in Kwagga Smith. Smith was Siya Kolisi's replacement on the side of the scrum during the 2019 Rugby Championship and while he is a vastly different player to Vermuelen, his ability over the ball is arguably the closest to Vermuelen's.
Smith has featured at no.8 for Japanese club Yamaha Jubilo this season and was named in the Top League Best XV of the season in the position. He packed down at the back of the scrum on occasion for the Lions in the past, but he is more of an openside flanker than an eighth man. He possesses a different kind of ball carrying option for the Boks with his speed and footwork while he won't let the Springboks down on defence.
Finally, the player that can't be left out of the conversion is the snubbed Marcell Coetzee. While the former Ulster no.8 was omitted from the Springboks' initial squad to prepare for the Lions Series, his non-call up is not down to his ability. Coetzee is possibly the most like-for-like replacement for Vermuelen and is likely to get a call up if the Bok vice-captain is ruled out. 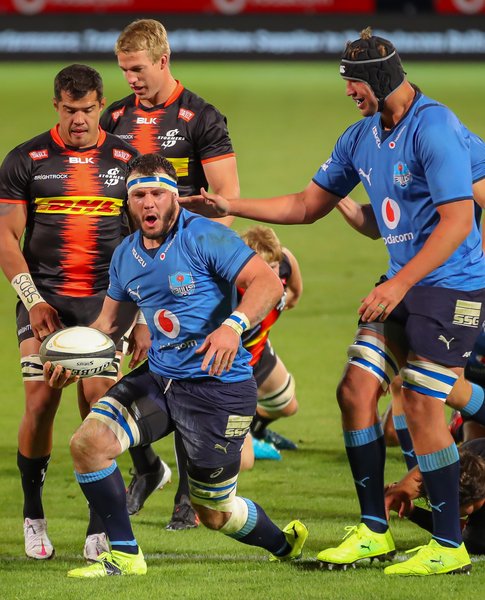 Nienaber explained that Coetzee missed out on the squad due to the lack of game time he has had in recent months and that he will only come into the equation as an injury replacement once he has some provincial games under his belt.

“Before the match against the Stormers, Marcell last played on 6 March. That was when he got injured, so this was literally his first game back [The Bulls win over the Stormers on Friday],” said Nienaber.

Nienaber did hint that there is a chance that he will feature in the Series.

“That’s the home ground advantage we have with a guy like Marcell playing in South Africa. He can play next weekend, he can play in the Rainbow Cup final if they make that, he can maybe play a game against the British & Irish Lions on 3 July.

“We might pick up injuries, and hopefully we don’t, but obviously guys like him can still make the squad.”

The logistics of piecing together a 47-man squad from all over the globe for the Lions Series is one of the biggest challenges the Springboks' coaching staff have had to deal with in naming their squad. The logistical headache of flying in a replacement in the build-up to the test series could well have played into Coetzee's exclusion. The decision to withdraw the Springbok players from the local Rainbow Cup teams also adds to the thinking behind Coetzee's exclusion.
"You know if the Bulls or Sharks go play Benetton or Munster, they are going to play without their Springboks," Erasmus said after the team announcement.
Erasmus explained that they could release a player to feature in the Rainbow Cup but that player would then have to go into a bubble for 10 days.
"The problem there is you lose him for 10 days because they have to go into a bubble for 10 days for the Lions – that is part of the contract"
Coetzee can now get a few games under his belt with the Bulls before linking up with the squad at a later date as an injury replacement. Having Coetzee play in South Africa means that he won't have to isolate before entering the country which may have been the case had they tried to call up the likes of Dan or Jean-Luc du Preez at a later date.
If Vermuelen is to miss the Lions Series through injury, Coetzee looks to be the straightforward replacement in the starting XV while the du Preezs, Smith and Wiese all bring a differing approach to the game.