Another cracker set for Twickenham as England take on the Boks

In the 116th year of the rivalry’s history, the Boks will take on England at Twickenham on Saturday in what promises to be yet another bruising contest.

The English will be well battle-hardened after squaring off against the All Blacks last weekend. Eddie Jones charges’ rallied in the second stanza to execute an almighty comeback after being down 17-3 at half-time:

The Springboks, meanwhile, hit some rhythm for the first time during this Autumn Nations Series when they turned the screws on the Italians, the final whistle sounding with the final score at 63-21:


England and South Africa last locked horns in 2021, where England enjoyed a very tight victory at the death:


Springbok coach Jacques Nienaber made eight changes and two positional switches to his matchday squad to face England at Twickenham on Saturday in the final Castle Lager Outgoing Tour clash, with a handful of South Africa ‘A’ players and Canan Moodie, who joined the team as reinforcements this week, getting a run.

Jacques Nienaber has made six changes to his starting team with Jesse Kriel (centre), Makazole Mapimpi (wing), Evan Roos (No 8) and Eben Etzebeth (lock) back in the mix, while Damian de Allende moves from outside centre to inside centre where he partners up with Kriel, and Kurt-Lee Arendse will start at right wing after playing on the left in Genoa.

There were also four changes on the replacements bench, which will again feature the more traditional split of five forwards and three backs, with SA ‘A’ captain Thomas du Toit (prop), Marco van Staden (flanker), Jaden Hendrikse (scrumhalf) and Moodie being drafted in.

This follows the unavailability of Cheslin Kolbe (wing), Andre Esterhuizen (centre), Cobus Reinach (scrumhalf), Jasper Wiese (No 8) and Vincent Koch (prop), who all returned to their clubs.

“With this Test falling outside the international Test window, we knew we would have to make changes to the team, but we are pleased with the depth we have built in the wider squad in the last few months, and it is paying off for us this week,” said Nienaber.

“Every player in this squad has played Test rugby, and most of them have received game time at this level thanks our selection plan throughout the season and the SA ‘A’ games against Munster and Bristol.

“We are very excited to see what this group of players will do against a quality England side given the mix of talented young players who have been putting up their hands and the experienced guys who have come a long way with us over the last few years.”

Nienaber added: “As with all competitions we can only select a limited number of players, so we have had to be creative with balancing building player combinations and giving the young players a chance to show us what they can do at top Test level and this game gives us a golden opportunity to do so.

“It doesn’t get bigger than playing against England at a packed Twickenham in the last Test of the season for a player, and one can sense the excitement among the players about this occasion.”

Nienaber expected a massive onslaught from England, who snatched a 25-25 draw against New Zealand last week after being edged by Argentina and then registering a convincing victory against Japan.

“England will enter this match with the same mindset as us – to finish the season on a high note after a tough November campaign, and to build momentum with an eye on the World Cup,” said Nienaber.

“So, we are expecting them to throw everything they have at us. They are a well-balanced team with a strong pack of forwards and exciting backs, and they are well coached, so we know it is going to be an epic encounter.

“We lost against them by one point in our last two matches at Twickenham and the last time we beat them in London was in 2014, so we have to be accurate in all areas of our game, effective in our execution and we need to covert our chances into points.

“This is the last time the squad will be together in competition until next June, so the players really want to make the most of this opportunity and to make the country proud.

“We had two narrow defeats against the top two teams in the world in Ireland and France and we defeated Italy, and it would be fantastic if we could finish the tour on a high note.” 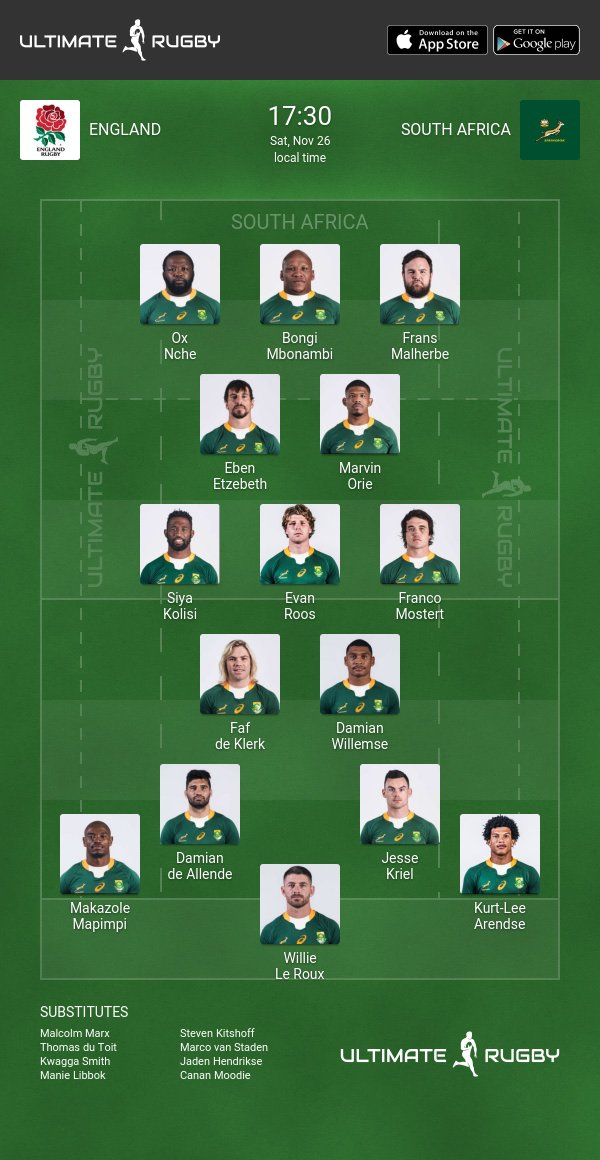 In the England camp, Manu Tuilagi makes his 50th appearance for England at outside centre.  Tuilagi made his debut for England against Wales in August 2011.

Owen Farrell will again captain the side at inside centre.  Marcus Smith is at fly half and Jack van Poortvliet is at scrum half.

Tommy Freeman comes in at right wing, Jonny May is at left wing and Freddie Steward is full back.

Alex Coles comes in at flanker with Tom Curry, while Billy Vunipola is No.8. 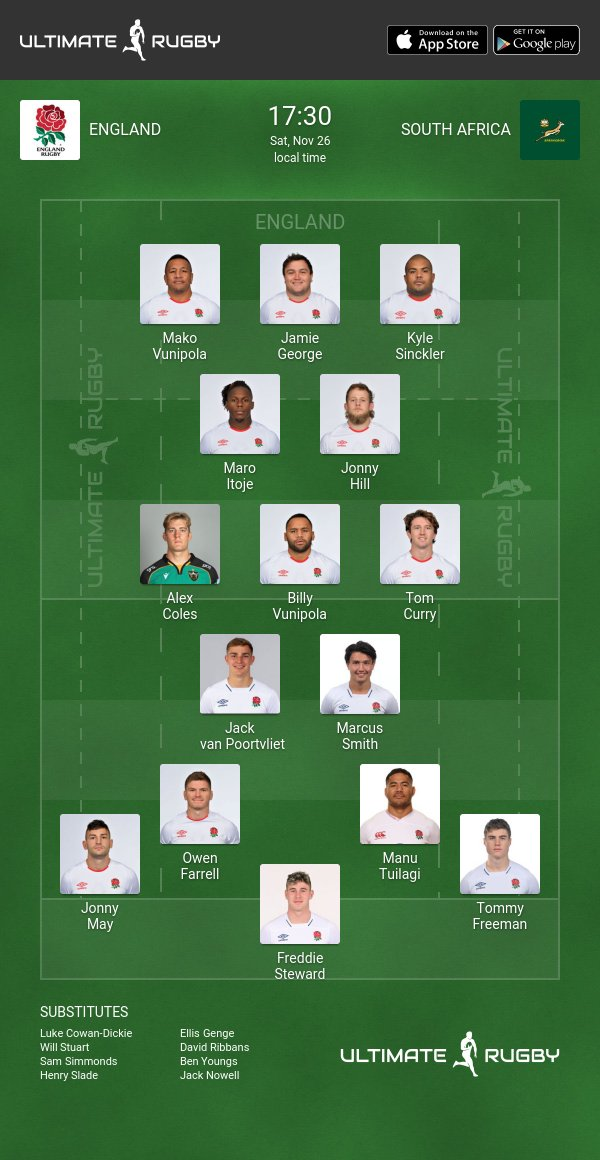