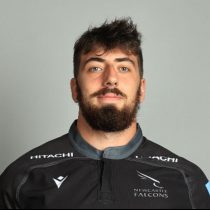 A relatively late starter when it came to rugby, only getting involved for the first time when he was 14. A talented athlete, Dalton was a goalkeeper in soccer and excelled in athletics, competing in the pentathlon and earning a few Ireland singlets, but when he was convinced to give rugby a go in second year at Belfast Royal Academy, he never looked back.

Tall and explosive, he was soon impressing in lineouts and with his powerful ball-carrying in the second row or back row for the Belfast school.

Dalton was named in the Ireland u20s squad in 2018 and scored a try in his second start against Scotland.

Dalton has featured for the Ulster 'A' side this season and has made the step up to senior rugby with Ulster in the Pro 14.

By the end of the 2018/19 season, Dalton had already made 9 appearances for Ulster in enters his third year as part of the Province's Academy.