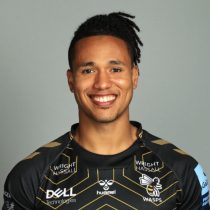 Marcus is the older brother of England and British & Irish Lions winger Anthony Watson. Marcus played on the wing for London Irish Academy and for England at U16, U18 and U20 levels. Going to the Junior World Championship in 2010,he made two Premiership appearances for Irish before moving to Saracens in 2011 and then signed for England as a full-time Sevens player in the summer of 2012.

At the age of 20 Watson ran the show on the Gold Coast, lifted the Dubai title the following week and went on to play in Port Elizabeth, Wellington and Las Vegas before a hip injury interrupted his progress. He has appeared in 21 HSBC Sevens World Series events and scored 214 points, including 27 tries last season before playing in the RWC Sevens in Moscow.

His total includes four tries in the 2013 Dubai event, three in Las Vegas in January this year and two against Samoa in the Cup quarter-final in Wellington the following month. In July 2016, he received an Olympic call to represent Team GB’s rugby 7s squad for Rio de Janeiro. Watson will join Wasps for the 2017/18 season, the 25-year-old helped Great Britain Sevens win a silver medal at the Rio Olympics and has also represented England in the World Rugby U20s Championship.

Watson arrived at Wasps at the beginning of the 2017/18 season after impressing against the Club while claiming a Premiership brace for Newcastle Falcons at Kingston Park. He secured his first Wasps hat-trick against Worcester Warriors at Ricoh Arena in October 2019

Equally at home as fullback or on the wing, Watson has made forty-five senior appearances by May 2020 scoring a total of 18 tries including a spectacular solo effort and Try of the Season contender at Welford Road in March 2019, and a quickfire brace in a magnificent away win against Bath at the end of 2017.

In May 2020, Watson signed a new deal to remain at Wasps.