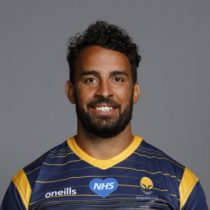 Mama initially joined Warriors on loan from Bristol Rugby in August 2015 before signing a permanent deal at Sixways in January 2016.

He returned to Bristol Rugby temporarily towards the end of the 2015/16 season and helped them win promotion to the Aviva Premiership via the play-offs.

The all-action back row was in fine form during the 2016-17 season and became a regular in the Warriors starting line up.

In February 2018, Mama signed a one-year extension to stay at Sixways before becoming the latest member of the 2019 Warriors squad to sign another contract extension in February 2019.

The Zimbabwean suffered compartment syndrome – a severe dead leg – against Gloucester in April 2019 and required four operations in a ten day period to save his right leg.

He suffered a recurrence against Exeter in November 2019 but made a successful return to action two months later.

After 62 appearances for Warriors and seven tries scored, Mama signed a new one-year extension to his contract at Worcester.