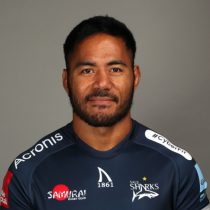 The youngest of the six rugby playing Tuilagi brothers is also the only one actually schooled in England. Following in the footsteps of his international rugby brothers, Manu Tuilagi has carved an impressive record of his own with Leicester Tigers, England and the Lions.

A Premiership title winner in 2013 – scoring against Northampton Saints in the final – Manu then shared in the triumphant trip to Australia with the British & Irish Lions. He also scored a double at the Tigers supporters’ awards as he was named Young Player of the Year for a second time and won Try of the Season award after finishing a superb team score against Worcester Warriors.

Manu followed older brothers Fereti, Henry, Alesana, Anitelea and Vaevae into a Tigers shirt, and became the first member of the famous rugby family to win representative honours with England. He claimed his first try in senior rugby in a home win over Leeds in September 2010 and lined up at centre alongside club colleague Billy Twelvetrees with England Saxons during the 2011 Six Nations before progressing to the senior squad.

Named Young Player of the Year by the Rugby Players Association and also by Tigers supporters and players in 2010/11, he missed the Premiership Final due to suspension but established himself as an international and went to his first Rugby World Cup.

In November 2013, Tuilagi was ruled out for 4 months after he tore his pectoral muscle. He made his return against Italy in March 2014 and marked the occasion by scoring a try.

During the 2015/16 season, Leicester Tigers announced that Tuilagi had signed a contract extension ending rumours that he would be leaving the club. A hamstring injury in the 2016 Premiership semi-final denied him inclusion in England's tour to Australia.

Tuilagi is set for a prolonged spell on the sidelines of 6 - 9 months due to a cruciate ligament injury.

He returned from injury in fantastic form and earned a recall to the England squad during the 2018 November Internationals. He remained in the squad for the entirety of 2019 and went on to feature in the Rugby World Cup taking his test cap tally to 41 as England reached the final with Tuilagi putting in a man of the match performance against Tonga. He went into the 2020 Six Nations having made 14 appearances in the Six Nations previously scoring 5 tries in the competition.

In July 2020, Tuilagi was released from his contract at Leicester Tigers following his refusal to take a 25% pay cut to reflect the impact of the coronavirus pandemic. Later in July, Sale Sharks confirmed that Tuilagi had signed with the club until the end of the 2020/21 Premiership season.

An achillies injury meant that Tuilagi had made just seven appearances for Sale by April 2021 with centre missing the Autumn Nations Cup and 2021 Six Nations. He signed a new two year deal with Sale in April which will see him remain at the club and eligible for England until the 2023 Rugby World Cup.