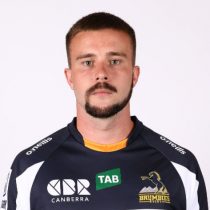 A tall playmaker who has loads of potential, Hansen joined the Brumbies on a development contract for the 2018 Super Rugby season. Born and bred in Canberra, Hansen was a schoolboy prodigy for Daramalan College, leading his team to an undefeated regular season and Grand Final berth in 2016.

He had an excellent season with the Gungahlin Eagles in the local Aquis Entertainment John I Dent Cup in 2017 and was a standout for the ACT Schoolboys at the National Championships in the same year, leading the side throughout the tournament from the flyhalf position as they punched above their weight against more fancied opposition.

He went on to represent the Australian Schools Barbarians against Tonga, impressing from the fullback position and continued to represent the Brumbies in the 2017 Super U20’s competition. Unfortunately, Hansen’s tournament was cut short by injury, ruling him out of the end of the tournament as well as a potential Junior World Cup campaign with Australia.

The speedy utility back was in stunning form locally in 2019, playing his part in the Gungahlin Eagles finals push in the Griffin Legal John I Dent Cup, as well as crossing for six tries in two matches for the Brumbies Runners.

This form led to his first Brumbies cap, the 2019 Super Rugby match with the Waratahs at GIO Stadium and, whilst the cameo appearance may only have lasted four minutes, plenty more is expected of a supremely gifted individual.

He has been included in the Brumbies 2020 Super Rugby squad.

In September 2020, he signed a new deal with the Canberra side.

April 2021 saw him sign a two-year deal with Connacht.

November 2021 saw him being included in the Ireland squad for the Autumn Nations Series.