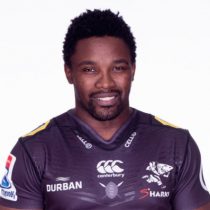 The quicksilver Sharks wing has the raw pace to turn the slightest of opportunities into a try, which is what he demonstrated on his Test debut against England.

His low centre of gravity and considerable upper body strength make him tough to bring down, whilst his pace and physicality also make him a reliable defender. Mvovo also has the ability to cover the fullback position.

He was a part of the Springboks 2015 Castle Rugby Championship & RWC Squad.

Mvovo has scored 150 points in 99 Super Rugby appearances since his debut in 2010 against the Lions.

Mvovo made 13 appearances for the Sharks during the 2017 Super Rugby season and will join Japanese side Canon Eagles.

He heads into the 2018 Super Rugby season as one of the Sharks most capped players in the competition with 112 caps and has scored 35 tries.

His versatility enables him to play across the back three for the Durban-based side.

Mvovo featured in all 17 of the Sharks Super Rugby matches, with his performances during the 2018 season earning him a re-call to the Springbok squad ahead of the Rugby Championship having last featured for the side in 2016.

Mvovo heads into the 2018 Rugby Championship with 17 test caps.