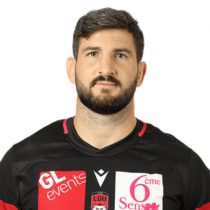 A tough and uncompromising looseforward Loann Goujon has moved around French clubs after starting his career at Clermont Auvergne at the age of 17 to play in their youth and development teams.

Having won the U20 6 Nations with France in 2009 he went on to earn 6th place with this side in the 2009 Junior World Championships.

After leaving Clermont he joined La Rochelle where he earned well over 50 caps and in 2015 he made a move to Bordeaux Begles.

Goujon made his test debut off the bench against Scotland during the 2015 Six Nations. He was called into the squad once again in 2016 following an injury to Louis Picamoles.

He signed for Lyon in 2018, leaving Bordeaux. The versatile forward has been in and out of the France squad throughout his career, last featuring in 2017 to earn his 17th test cap.