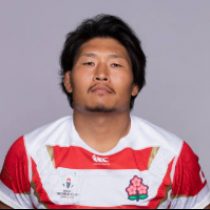 The front-rower quickly rose to prominence in the Japanese Top League during the 2013/14 season and after a standout second season, Inagaki caught the eye of Australian Super Rugby side the Melbourne Rebels.

He spent the 2015 Super Rugby season with the Rebels having made his test debut a year earlier in a 18-13 win over Romania in Bucharest.

Inagaki featured in his first World Cup in 2015 and featured in all four of Japan's matches including the historic victory over the Springboks in the opening game.

He was part of the initial Sunwolves squad and 24 appearances for the Super Rugby side the last appearance coming in 2018.

Inagaki was once again selected in Japan's Rugby World Cup squad in 2019 and featured in every one of the side's matches in the tournament.

He started the quarter-final of the competition with the test being his 28th start from his past 31 tests.

He ended the competition with 34 test caps scoring one try.