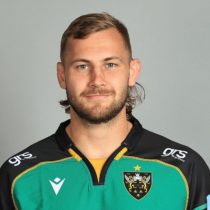 Experienced at lock as well as in the back row, Wilkins initially left for France aged 18, joining Montferrand from Saints’ Academy system where he was part of the Northampton squad that won the Premiership’s Under-18 Academy League in the 2013/14 season – alongside the likes of Harry Mallinder, George Furbank, Lewis Ludlam, Rory Hutchinson and James Fish.

The forward returned to Franklin’s Gardens ahead of the start of the 2021/22 season, having gone to France to represent French ProD2 side Béziers Hérault, where he made over 50 appearances.