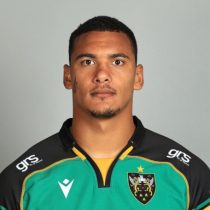 Augustus started his rugby at the age of 12, playing for an Eersterivier club called Whistling Wheels, and at junior level made the Western Province U12 team.

His highest achievement before being selected for the SA U20’s was playing in the Under-18 Coca-Cola Academy Week, and eventually invited to play for the Western Province Rugby Institute.

Augustus represented the Junior Boks at the World Rugby Under-20 Championship, where he crossed the try line in each of the team’s five matches in the international spectacle to finish the tournament with a grand total of seven tries, the most by any player.

On June 18th, the Junior Springbok No 8 was named the World Rugby Under-20 Championship Player of the Tournament.

Described by Stormers coach John Dobson as someone with a diesel engine, Augustus is dubbed as Duane Vermeulen's long-term successor.

In February 2021, it was announced that Augustus would be joining Northampton Saints in the English Premiership ahead of the 2021-22 European season.

World Rugby U20 Championship 2017 Player of the Tournamen