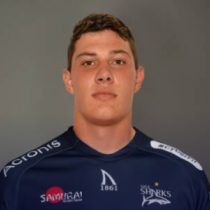 Du Preez represented the Falcons at the 2012 Under-18 Craven Week tournament in Port Elizabeth, scoring a try in their match against the Leopards.

In 2013, Du Preez made a short move to the Johannesburg-based Golden Lions helping them reach the final of the 2013 Under-19 Provincial Championship. In 2015, he was included in the Lions squad for the 2015 Super Rugby season.

He made his Super Rugby debut, coming on as a substitute just after the hour mark and, in doing so, becoming the tallest player ever to play Super Rugby.

Tough competition for spaces in the Lions Super Rugby and Currie Cup squads saw du Preez move to the Cheetahs in January 2018 having failed to make a single appearance in either competition in 2017.

Standing 2.09 meters tall, he is the tallest player to ever be registered in Super Rugby and will be the third tallest Premiership player in history after signing a two-year deal with Sale Sharks.

During his time at the Cheetahs, JP made 26 appearances in both Super Rugby and the Pro 14.

The man from Roodeport joined Sale Sharks in November 2020, making 18 appearances for the English Premiership until 2 December 2021.

On 2 December 2021, Glasgow Warriors confirmed that du Preez signed for the side ahead of the 2022/23 season.