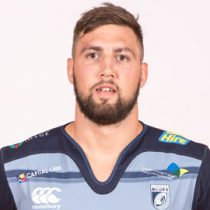 A promising flanker who has represented Wales at Under-18, Under-19 and Under-20 levels and participated in two IRB Under-19 World Championships.

Turnbull joined Scarlets in 2007, having previously played for Carmarthen Quins and Llanelli, and has made a total of 119 competitive appearances.

The Haverfordwest-born flanker was named in the Wales senior squad for the first time for the 2011 6 Nations and made his debut as a replacement in the win over Scotland at Murrayfield. He was also selected for the 2012 tour to Australia and 2014 tour to South Africa.

The versatile forward joined Wales’ Capital Region in 2014 after making 130 appearances during a seven-year period at the Scarlets.

Turnbull developed into an important player for the Blues and puts his body on the line week in week out. At the start of the 2017-18 season, Turnbull has made 70 appearances at the club scoring nine tries.

The Wales international featured in every game during the 2019/20 for Cardiff by December 2019, playing more minutes than any other player in the squad before he signed a new long-term deal at the Arms Park.

In September 2021, Turnbull succeeded Ellis Jenkins as Cardiff captain on a permanent basis ahead of the 2021/22 United Rugby Championship.