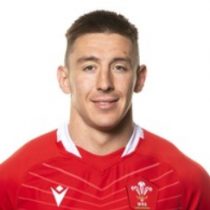 Adams, from Hendy, Llanelli, left the Wales rugby scene in 2014 after he failed to receive a contract offer from Scarlets.

The former Ysgol y Strade pupil, joined the Worcester Warriors Academy from Scarlets in the 2015 & impressed for Worcester Cavaliers while also enjoying stints at Cinderford RFC and Nottingham Rugby.

The winger was handed his Worcester debut in September after coming off the bench against Bath Rugby in the Premiership, and went on to make six appearances, which included his maiden try for the Club in Russia against Enisei-STM.

Adams also starred in the 2015 World Rugby Under 20 Championship as he bagged four tries in five games for Wales.

He impressed in his first senior outing for the Warriors, scoring in a pre-season match against Saracens at Bramley Road in 2015 and continued his development with spells at Cinderford during the 2015/16 campaign and Nottingham at the start of the 2016/17 season.

Adams' tries proved crucial during the 2016/17 season as he racked up four braces and became another success story of the Warriors Academy. In November 2016, he earned a first-team deal with Worcester and made his Test debut against Scotland in the 2018 Six Nations.

Adams started all five games in Wales' 2019 Grand Slam Six Nations taking his test cap tally to 11 in doing so. Following the Six Nations, he signed a long-term deal with Cardiff Blues and linked up with the side after the World Cup.

In three seasons, he racked up 26 tries in the league, including 13 in the 2017/18 season to finish as the competition’s top try-scorer.

He scored three more tries in Wales’ 2019 Grand Slam before scoring seven at the World Cup in Japan including a hat-trick against Fiji.

Adams was in fantastic form at the World Cup and set the new record for the most tries scored by a Welshman at the tournament, 7, surpassing Shane Williams record and helped Wales to a fourth-place finish.

He finished the tournament with 21 test caps and 11 tries. Adams entered the 2020 Six Nations with a total of 21 caps. He scored a hat-trick for Wales in the 42-0 Six Nations win over Italy in February 2020.

Another hat-trick in the 2020 came against Italy, while he scored a try in each of his three appearances in the 2021 Championship as Wales claimed the title.

In May 2021, Adams gained selection for the 2021 British & Irish Lions tour to South Africa.

Adams made his Lions debut against Japan at Murrayfield and scored a try in the opening game of the tour. Before the test series, Adams had scored 8 tries in 4 matches for the tourists which included hattricks against the Lions and Sharks.