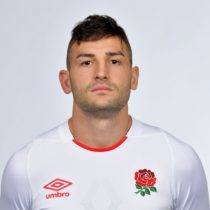 Born in Swindon, England, May is one of the most electrifying backs to grace the English premiership. Blessed with raw pace and a step to match, he has been tearing defences apart since breaking onto the professional scene with Gloucester in 2009 as a 19 year-old.

May came through the Gloucester academy and played for England Under-20s before becoming a first-team regular in 2011/12 when he also won the LV= Breakthrough Player award and a Premiership Player of the Month award while celebrating a call-up to the England Saxons squad.

A combination of pace and power brought 10 tries in a run of 11 games during 2012/13 which propelled him into the Test reckoning with England and he won his first cap on tour to Argentina.

The flying May earned his first international cap with England in 2013. He was included in the English squad for the upcoming Six Nations Championship in 2015.

Jonny May has impressed heading into the World Cup, appearing in 3/3 warm up games and scoring 2 tries. These performances have helped May seal a spot in Lancaster's RWC 2015 side. Unfortunately, England failed to progress through pool stages of the competition.

After gaining his first World Cup experience in 2015, Jonny scored 12 tries in 17 starts for Gloucester during 2016/17. Injury prevented him from playing in the subsequent Six Nations and touring Australia in June 2016 but he returned after 13 months’ absence from the side with a try from a devastating, angled run against South Africa at Twickenham that November.

On form, May is one of the deadliest finishers in the game but has struggled with injury in recent periods. He joined Leicester Tigers from Gloucester in the summer of 2017 and announced his arrival with 11 tries in his first 10 games for the club.

May re-established himself on the international stage following an encouraging Autumn series, playing a part in retaining the 6 Nations title in 2017.

The 2018/19 campaign then brought another 12 scores in 19 appearances while an impressive run with England made him Europe’s top scorer that season with a total of 19 for club and country.

May was selected in Eddie Jones' squad for the Rugby World Cup where he scored 3 tries in 5 games as they reached the final, a game May started.

At the conclusion of the 2020 Six Nations, the deadly finisher had scored 29 tries in 56 tests for England.

May returned to Gloucester from Leicester Tigers in July 2020.