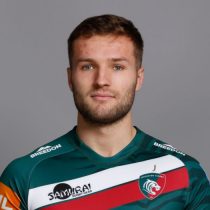 McPhillips was born and grew up in Newcastle Upon Tyne and played for England at U18 level.

He spent five seasons in the Newcastle United Academy before putting his focus on rugby after receiving a scholarship to boarding school at Sedbergh.

McPhillips has thrived in his first year in the Ulster Academy, during which he featured heavily for Queen's University and the Ulster 'A' team.

His performances were rewarded with a call up to the Ireland U20 squad for their Six Nations campaign and he started all five matches in the 10 jersey.

In April 2016 he was upgraded to a development contract and played a key role in Ireland's passage to the final of the Junior World Championship in England.

He made his senior debut for Ulster in the 2017-18 season and has showed all the signs that he could one day be a first choice out-half for the province.

After 24 appearances in two seasons for Ulster, McPhillips signed a deal with Leicester Tigers.

He made eight first-team appearances in his debut season despite suffering a knee ligament injury in his first Premiership start, at Saracens in March.

McPhillips made 22 appearances for Tigers scoring 71 points before making the move to Carcassonne ahead of the 2021/22 season.