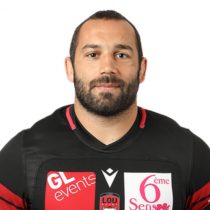 Jean-Marc Doussain was born in Sainte-Croix-Volvestre and played for Saint-Girons rugby club before signing for Toulouse in 2007 at the age of 17. He made his first full appearance for Toulouse on 28 November 2009, against Montauban and has since amassed over 140 appearances and more than 200 points for the club.

In June 2016, he was called into the French national team to prepare for the 2016 November Tests.

Doussain was included in Guy Noves's 2017 Six Nations squad ahead of their opener against England. Doussain has appeared 7 times for France in Six Nations - scoring 27 points.

He was named in the France squad to tour South Africa, despite being ruled out of the June internationals earlier in the year.

Heading into the series he has made 15 appearances for the national side. He featured in two of the three test matches during the tour taking his test cap tally to 17.

Doussain made 19 appearances for Toulouse during the 2017/18 season and at the conclusion of the season signed a new deal with Lyon from the 2018/19 season.

Now an experienced halfback in the Top 14, Doussain heads into the 2019 Champions Cup season with 52 European caps and 109 points.