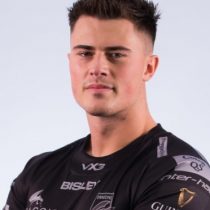 A winger that knows his way to the try line. Jared Rosser made his debut for the Steelmen as a 17-year-old in 2016 and scored the decisive try in their Principality Premiership Play-off semi-final victory against Llandovery and went on to be a member of the victorious Ebbw Vale side which swept away Pontypridd in the Premiership final at Sardis Road.

His impressive form in the Principality Premiership saw him being included in the Wales U20 squad for the 2017 U20 Six Nations. The Dragons Academy ace went on to represent the u20s having also represented his country at Under-18s and Under-16s.

An outstanding 2017 saw him make his senior Dragons debut against Leinster and tour with the Wales Sevens team. Rosser underlined his attacking treat when he scored a hat-trick in the PRO14 against Zebre in April 2018 – becoming only the fifth player to score a hat-trick in a senior game for Dragons.

The former Abersychan School student also showcased his talents in the Celtic Cup in the 2018/19 season when he scored five tries against Connacht Eagles at Ystrad Mynach.

The potent attacker has plenty of time to fulfil his promise and as of June 2020 he is already producing on that promise scoring 17 tries in his first 47 games for the Dragons.