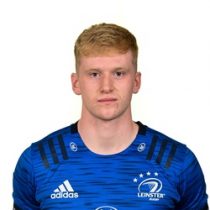 The former Naas CBS pupil, who has come through the Leinster Rugby club system with Naas Rugby Club, played with the North Midlands side in the Shane Horgan Cup. He made his debut for Leinster in the URC Round 8 match against the Scarletts. A player comfortable in the centres and at Fullback he has a big left boot. In the first 8 games of the 2022/23 season he played across the backline playing 11, 12, 13 and 15. After some stellar performances in the Heineken cup he was named in the 2023 Six Nations Squad