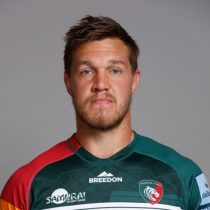 Liebenberg was twice selected to represent Boland and later moved to Pretoria to join the Blue Bulls. He represented the Blue Bulls Under-19 side in the 2014 Under-19 Provincial Championship.

He earned his first selection for the Bulls in 2015 and followed in his brother Wiaan’s footsteps by captaining South Africa in the 2015 World Rugby Under 20 Championship.

Liebenberg was in fine form during the 2017 season and was close to a test call up before injury ended his season.

The versatile forward joined Stade Francais on loan during the Super Rugby offseason, before returning to the Bulls for what would be his final Super Rugby season.

Liebenberg signed for Leicester Tigers ahead of the 2019/20 season having made 44 appearances in Super Rugby for the Bulls scoring 8 tries.

He made 9 appearances for the Welford Road side before agreeing a new deal in July 2020.

In August 2021, he was appointed vice captain of Leicester Tigers, with Ellis Genge wearing the captain armband.