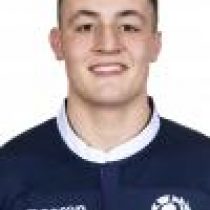 A product of Carlisle's Richard Rose Central Academy, Graham currently turns out for Borders outfit and BT Premiership side Hawick.

The back-row has represented both the South of Scotland and Borders U20.

Graham is the son of George Graham - the 25-times capped Scotland international prop - whilst his brothers George and Gary are both Scotland club internationalists.

In 2018, he signed a deal with Newcastle Falcons.