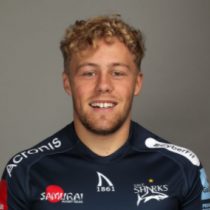 The scrum-half joined the academy at Sale and kicked off his time there when he was named as part of the squad for the televised Rugby Sevens at Franklins Gardens in Northampton.