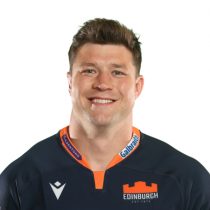 A lock with a future to match his tremendous height. Gilchrist’s impressive form for Edinburgh, particularly in their 2012 Heineken Cup campaign, saw him selected in Scotland’s 2012 Autumn international campaign. He has represented Scotland at U-18, U-19 and U-21 levels.

Gilchrist was part of Scotland’s IRB World Championship team of 2010 and was the recipient of the prestigious John McPhail scholarship and spent months playing in Christchurch, New Zealand for the Lincoln University.

In August 2016, he was named co-captain of Edinburgh Rugby, alongside teammate, Stuart McInally for the 2016/17 season.

The Scotland internationalist joined the club on an academy contract ahead of the 2010/11 season and – after a period in New Zealand as a recipient of the coveted John MacPhail scholarship – made his Edinburgh debut against Cardiff Blues the following term.

He went on to make 26 appearances in his first season and has now represented the club on over 100 occasions.

In January 2018, he was named in Scotland's squad to compete at the 2018 Six Nations tournament, where he would add to his 18 caps.

Gilchrist cemented his name in his nation's squad for the 2019 Rugby World Cup in Japan before receiving another call-up to the squad that would compete at the 2020 Six Nations tournament.