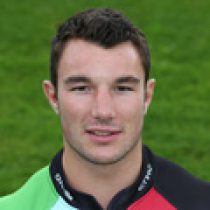 The young centre has developed his game at the Harlequins academy and played for England Under-20 in 2009 at the Six Nations and IRB Junior World Championships.

He has forced his way into the Quins first team and broke into the large England squad that toured South Africa in 2012. Still yet to win his first Test cap, Lowe is a player with massive potential and he could turn some heads in the years to come.

In August 2017, Lowe announced that he has been forced to retire from the game on medical advice.

In a stellar career for the Club, Lowe made 139 appearances in the quartered shirt, playing 9,935 minutes and scoring 28 tries across eight seasons at The Stoop.