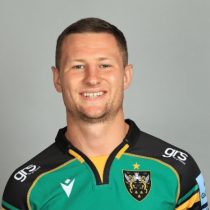 Dingwall first linked up with Northampton Saints at just 14 years old and broke through into the senior squad during the 2018/19 season.

The young back, schooled at Bedford School, came up through the Saints Academy ranks. Beginning his international career with Scotland, Dingwall played through the age-groups before switching allegiance to England on reaching Under-18 level.

Playing with England at the U18 International Series, accumulated five Under-18 caps to his name. Dingwall played mostly Under-18 level at Saints but earned the call to the Wanderers for the Aviva 'A' League final and bagged himself a winners medal as the side beat Gloucester United to claim the title.

November 2018 saw him sign his first senior contract after scoring a sensational first try against Wasps, while he was nominated for the Premiership Rugby Cup’s Breakthrough Player award during the 2019/20 season.

In 2019, Dingwall was included in England's U20 Six Nations squad and was named skipper for his second season at that level, captaining the side for the 2019 tournament as well as at the 2019 World Rugby Under-20 Championship in Argentina.

Dingwall enjoyed a breakthrough 2018/19 campaign, Chris Boyd’s first season at the helm, making his debut and racking up 12 senior appearances in Black, Green and Gold, and scoring four tries along the way.

Following a great 2019 he was named in the 2020 Six Nations Squad for England. He did not make his debut for England during the competition.

Dingwall featured in 23 of Northampton's 25 Premiership matches during the 2021/22 scoring twice and assisting 10 tries as Saints reached the semi-finals.

He was recalled to the England squad to tour Australia and will look to make his debut.