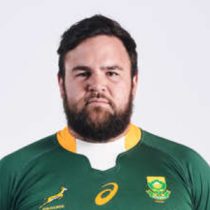 A product of the Western Province Rugby Institute in Stellenbosch, the former SA Schools prop made his Stormers Super Rugby debut as a 20 year old in 2011.

Winning the Currie Cup with Western Province in 2012, Malherbe was then handed his first test cap for the Springboks in 2013 when he ran out against Wales in Cardiff.

Known as one of South Africa's top scrummagers, Malherbe, is very technical and often gains the upper hand.

In 2015 he was included in the Springbok Rugby Championship Squad and wider RWC squad.

In May 2017 Malherbe was included in the Springbok squad to face France in the June Internationals, he has 10 test caps to date.

Malherbe started the first test against France before injury ruled him out of the remaining 2 fixtures.

He finished the Super Rugby season, having made 13 appearances and scoring 1 try.

Malherbe's season was then ended with yet another injury and will return to action with the Stormers in Super Rugby 2018.

Malherbe made a solid start to return from injury and was included in the Springbok squad for the 2018 June Internationals.

A regular in the Springbok pack, Malherbe anchored the powerful South African pack as they won the Rugby Championship and Rugby World Cup in 2019.

The tighthead produced a masterclass in the scrum during the Rugby World Cup Final in what was his 38th test cap.