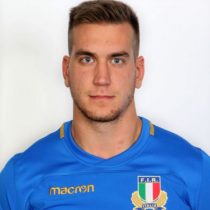 Ruzza made his senior debut in October 2012 playing for the FIR Academy side in Serie A2. His Eccellenza debut came for Viadana in October 2014 and followed this with his debut in the PRO12 for Zebre at home to Glasgow in February 2015.

Having represented Italy U20s, starting all five games in the 2014 Six Nations and skippering his country against England, Ruzza made four more appearances for them in the Junior World Championships in New Zealand the following summer.

He appeared for Emerging Italy in all three matches of the 2015 Tbilisi Cup starting in the second row against Emerging Ireland, Georgia and Uruguay.

He scored two tries on his Champions Cup debut for Zebre against Wasps at the Ricoh Arena in October - Zebre's only 2 tries on the day.

In January Ruzza was named in Italy's 2018 6 Nations squad having made his debut against Scotland in 2017, he went into the competition having made 3 appearances for the Azzurri.

Ruzza, named in the 2019 Six Nations squad at the back of 4 previous 6 Nation appearances.