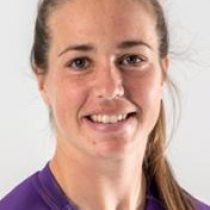 Leicester-born Emily will go down in history as the player who secured the England’s 2014 World Cup triumph with a try six minutes from the end when her side beat Canada 21-9 in the final.

A multi-talented all-rounder, she has played hockey and rounders and turned down the offer of a US Basketball Scholarship when 16. She burst on to the Test scene in 2008 with 12 tries in 12 games and became the top point-scorer, with 70, at the last World Cup, including 16 in the final.

Emily, who is from a Leicestershire farming family, has a Sports and Exercise Science degree from Leeds Beckett University and was a PE assistant before taking up a full-time sevens contract with the RFU.

She won the RPA England Women’s Players’ Player award in 2013 and was also nominated for the IRB Sevens Player of the Year that year.

She also scored 12 tries in 2015/16, including six in Atlanta where only Emma Tonegato, of Australia, bettered her total. Emily captained England in four of the five World Series events in 2015/16 and has run in 21 tries in ten events.

Last May, she achieved another accolade when being named in the World Rugby Sevens Dream Team of the Season and went on to captain Team GB Sevens at the Rio Olympics.

She was also nominated for World Rugby's Sevens Player of the Year of 2016. In September 2016 she was awarded a full-time EPS professional contract for 15s ahead of a huge year for women's rugby.

Emily was selected in the England 6 Nations squad before receiving a call-up to the suad that would participate at the 2017 Women's World Cup and add to her 69 caps.