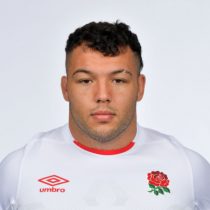 His career unfolded with appearances for England U17, U18 and U19 and while at Hartpury, he won a player of the year award and helped the college to lift two AASE league titles.

Ellis made ten senior appearances and went on to play in all five matches for England U20 in the World Championship in June 2015. He was called into the England squad for the 2016 summer tour to Australia and for the Wealth Cup game against Wales, where he would make his international debut.

A senior figure in the Tigers squad, Genge was a member of the squad that finished runners up at the 2019 Rugby World Cup in Japan.

In January 2020, he signed a new contract with Leicester Tigers having made 78 appearances.

Genge went into the 2020 Six Nations with 4 appearances in previous editions of the competition and in June 2020 signed a 1-year contract extension with Leicester Tigers.

In December 2021, he announced that he would not be renewing his contract at the Tigers. He had made 96 appearances for the club.

Land Rover Discovery of the Season 2017