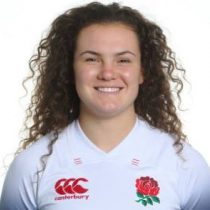 A captain of Yorkshire at Under 18 level, Kildunne represented the England Under 18 side at sevens where they were crowned European champions by winning the tournament in France in 2017.

Her natural speed saw her cross twice on her first test start.

Ellie’s rugby career has its roots in rugby league where growing up in West Yorkshire she started at Keighley Albion before stints at West Park Leeds and Castleford, and then joined Tyrrells Premier 15s outfit Gloucester-Hartpury for the 2017/18 campaign.

In the summer of 2018, the speedy back made the transition to the England Women’s Sevens team, qualifying for the 2020 Olympics before returning to 15s and joining Wasps Ladies in September 2020.

In July 2021, she signed a deal with Harlequins Women.