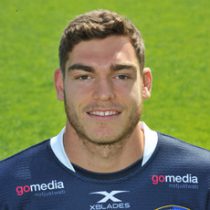 Elder, a formerly England under 18s player, started his career at Wasps in the academy and went onto feature for Esher and Plymouth Albion before signing for London Welsh.

The full back featured for London Welsh in the Premiership in 2014, scoring a try against former club Wasps.

In the 2016/17 season, Elder signed for Yorkshire Carnegie for the 2nd half of the season, making his debut on the boxing day.

Elder signed a deal to remain with the Leeds based club ahead of the 2017/18 season.