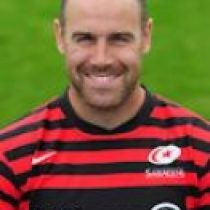 The vastly experienced pivot played in the No.10 jersey for Sale sharks for just over 10 years before joining Saracens in 2011. His prowess with the boot has made him a points-scoring machine for many years, and earned him several call-up to the England team. Hodgson starred for Sale in 2006 and helped the team to the Premiership title and was then selected as a British & Irish Lions tourist. The shrewd playmaker had added a lot of value to the Saracens team, and has the experience and vision to guide their supremely talented backline.