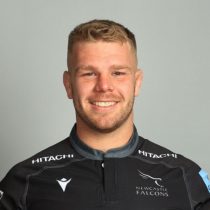 Chick started playing for Newcastle Falcons at age 12, Chick represented England at under 16 and captained the under 18 team.

Being a no-nonsense styled no 8, it was no surprise that Chick was called into and captain the under 20 England side that won the Junior World cup in 2016.

Since then Chick made his senior debut for Newcastle in the European Challenge cup.

After amassing 83 first-team appearances for Falcons, he signed a new two-year deal with the club.