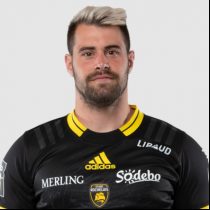 Retiere plays his club rugby for Stade Rochelais in the Top 14.

He participated in several stages of the preparation for the Sevens for the Olympic Games.

A very technically skilled player with a sharp turn of pace, Retiere joined La Rochelle in the offseason in 2016.

In June 2017, the scrum-half signed a new deal with the French club until 2020 having just finished his first full season.

As of September 2020, he has made 80 appearances for the Yellow and Black and has scored 169 points.