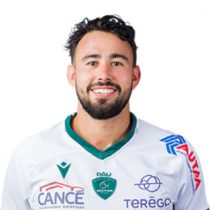 Antoine Hastoy is part of a talented group of halfbacks to break into the French TOP 14 during the latest 2010s.

A well-rounded flyhalf, Hastoy started his career in the Pau Academy and made his first strides into professional rugby at the tender age of 19 as he made two appearances via the bench for Pau during the 2015/16 season

Opportunities were limited to the former u19 French International but we eventually broke into the team during the 2018/19 season making 26 appearances between the TOP14 and Challenge Cup.

The 2020/21 season was a breakthrough year for the pivot as he commanded the starting 10 jumper for the club and was involved in the training squad for the French national team.