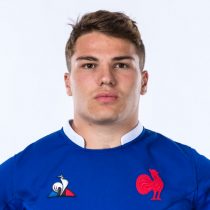 Dupont, a highly regarded halfback prospect from the village of Castelnau-Magnoac, started rugby at the tender age of five.

In 2011, as a cadet, he joined FC Auch's training centre & signed for Castres in 2014 making his debut in November against Toulon in TOP 14.

Dupont featured for Castres 11 times in the 2014/15 campaign, with the highlight coming in January 2015, he scored his first try in Castres colours against Harlequins in the Challenge Cup.

In the 2015/16 season, Dupont broke onto the scene after a stellar Junior World Cup campaign with France, scoring 5 tries in 3 games, 3 of those coming against Japan. The nippy halfback also featured much more prominently in the Castres line up with 18 appearances, mixing it up at scrum-half and out-half.

In September 2016, speculation was mounting on Dupont's future with various outlets reporting that he was on the move to Toulouse. However, Castres denied the claims vigarously, claiming the scrum-half was weighing up his options.

In May 2017, Dupont was named in the France squad to face South Africa in a three-match series, the young halfback made his debut against Italy in the 2017 Six Nations and followed that up with an appearance against Wales the following week.

His performances in the tournament secured his spot in the French squad for the 2018 Six Nations, where he looked to add to his 6 international caps.

He again cemented his spot in the French squad for the 2020 Six Nations.