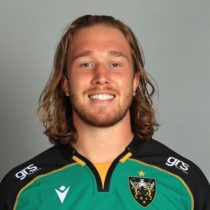 Beginning his rugby career at St Joseph’s College in Ipswich, Alex Moon studied at Sedbergh School before linking up with Saints’ Senior Academy at the start of the 2015/16 season.

With his father Jon a former coach of Ipswich RFC, uncle Steve a rugby league player for Bradford bulls, and auntie Vickie a physiotherapist at Yorkshire Carnegie and Leeds Rhinos, it was no surprise that Moon became a professional player.

Making his senior debut for Saints in 2016, Moon helped the Wanderers to lift the Premiership Rugby A League trophy in 2017 and 2018 before breaking into the first-team setup in 2018/19.

Making 18 appearances in Black, Green and Gold in Chris Boyd’s first season in charge, the towering lock made his Premiership debut against Wasps in November – and after subsequently signing his first senior contract with the Club, Moon scored his first Saints try in the European Challenge Cup quarter-final at Clermont Auvergne.

With 23 appearances for Saints under his belt ahead of the 2019/20 season, Moon also earned three Challenge Cup caps and earned a Six Nations call up in 2020 for England.