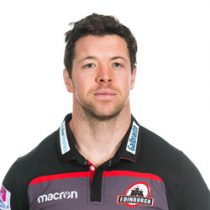 Born in Dundee, Dickinson joined Edinburgh as an apprentice in 2004, and went onto surpass 50 appearances in an Edinburgh shirt before joining English Premiership outfit Gloucester in 2007.

The prop made his international debut against New Zealand at BT Murrayfield in the 2007 World Cup, before making an appearance from the bench during Scotland’s famous 15-9 Calcutta Cup victory over England in March 2008.

As Dickinson’s international credentials continued to flourish, the prop would make the move at club level to Premiership rivals Sale Sharks.

In the summer of 2013, following two seasons at the AJ Bell Stadium, the prop returned north of the border to rejoin Edinburgh on a one-year-deal.

He earned his 100th cap for the club in the European Challenge Cup win over FC Grenoble in November 2015, and reached the half-century cap mark for Scotland in the Rugby World Cup 2015 clash against South Africa at St James’ Park, Newcastle.

Dickinson went onto make 120 appearances for the club during two spells in the capital, before announcing his retirement in August 2018.

The 58 tets capped internationalist will transition into the academy set-up with the opportunity to specialise in the scrum and contact area.